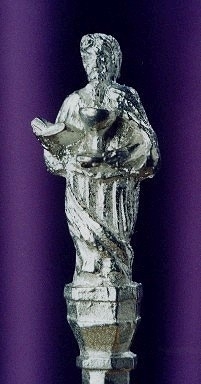 Son of Zebedee and Salome, and brother of Saint James the Greater. He became so close to Jesus that he was known as "the beloved disciple". He founded many churches in Asia Minor but spent most of his time in Jerusalem. He died of old age at Ephesus in 101AD, having survived all his fellow Apostles. His feast day is the 27th of December. He is the Patron Saint of authors, booksellers, engravers and painters. He is also Patron against burns and poisons. The spoon shows him holding a chalice.